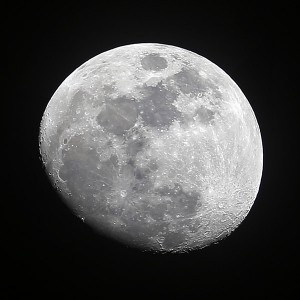 With signs of Spring finally appearing in New England I find my thoughts turning toward observing galaxies. The Lion is well positioned for viewing and I’ve been wanting to write a post on the Leo Triplet but that will have to wait a few weeks thanks to the brightening Moon.

While the Moon’s light does make it difficult to see the faint fuzzies that require dark skies, views of the planets as well as double stars are largely unaffected by the brightened skies and are good subjects between the 1st and 3rd quarters of the lunar cycle. Not to mention the Moon itself – the Moon is the richest object in the sky and time spent examining its treasures is well rewarded. 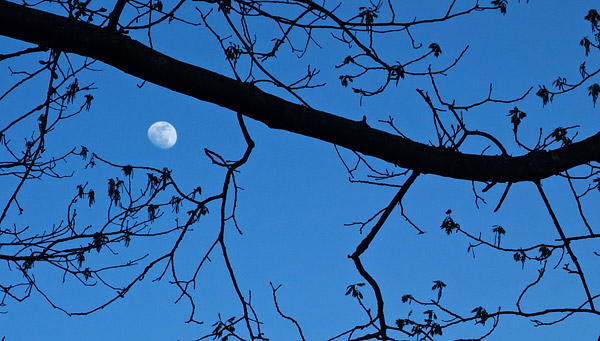 A very similar Waxing Gibbous moon rising on the evening of May 11, 2014.

The Moon changes quickly. From one day to the next it will look different than it did the day before and appear in a different place of the sky at the same time. I enjoy observing the Moon’s monthly trek across the sky and especially look forward to spotting the crescent moon. The Waxing Crescent, or “Young Moon” is found the Western evening sky shortly after the New Moon and the Waning Crescent, or “Old Moon”, early in the East shortly before the New Moon.

Sometimes during a crescent Moon you will be able to see the unlit portion of the lunar disc faintly glowing. This is light reflected from the Earth illuminating the portion of the Moon that is facing away from the Sun, and is called Earthshine.

The surface of the Moon is incredibly varied and offers a wealth of detail in scopes of all sizes. With the naked eye several large dark areas or maria are visible. Viewing the Moon at powers as low at 6-8x, through a pair of binoculars or a small scope, reveals many large craters.

I sometimes enjoy viewing the Moon at low powers through my East facing living room window. For a few nights centered around the Full Moon, the rising Moon can be easily seen by a small telescope kept in the room. At powers up to 12x the window glass has little effect on the view and many of the larger features are recognizable.

For low power observing I enjoy using Sky & Telescope’s Moon Map, which is a laminated map showing 280 features including craters, mountain ranges, and the positions of the Apollo landing sites. 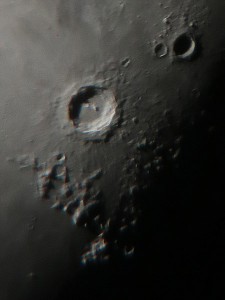 Crater Copernicus through the 10″ Dobsonian.

Higher powers reveal even more features and and a more comprehensive field map or a Moon atlas becomes useful. The Sky & Telescope Field Map comes in mirror reversed and correct view versions. The mirror image version is useful for refractor and catadioptric telescopes that use a star diagonal, which gives an upright but reversed image. The standard or correct view map is useful with Newtonian reflectors, with the map rotated 180° to match the view through the eyepiece.

There are many Moon atlases that map the lunar surface in detail and these are useful as desk references. I use the Cambridge Photographic Moon Atlas, which features high resolution photographs and has been a great complement to the field maps for my observing.

A good online Atlas is the Refractorland Observatory Hypertextual Moon Atlas, which is based on Antonín Rükl’s classic “Atlas of the Moon”.

Having had a bit of a break from a string of cloudy nights I’ve now been out three nights in a row viewing the Moon, which has got to be some kind of record for me. The first night I was using the 10″ Dob and was more focused on trying to photograph the moon rather than observe it visually. The second night I was making a visual comparison between an 80mm refractor and a 90mm Mak. Tonight was partly cloudy though I was able to capture the photograph at the beginning of this article with the same 80mm refractor.

My favorite lunar features are easily visible at 100x and look fantastic at 200x. The Alpes Montes are a mountain range located on the Northern rim of the of the Mare Imbrium near the crater Plato. They are bisected by a valley, Vallis Alpes, that appears as a huge gash through the range. These features can bee seen on sections 4 (at bottom) and 12 (at top) of the Hyptertextual Moon Atlas.

In the Northern center of the Oceanus Procellarum the Aristarchus Plateau hosts the craters Aristarchus, Herodotus, and the rile, Vallis Schröteri (see section 18 of the Hyptertextual Atlas). Aristarchus is one of the brightest craters on the Moon and small telescopes show terracing in the crater’s walls. The arching form of Schroter’s Valley can be easily seen in a 60mm refractor.

Exploring the Moon with a Lunar Observing Program

You can see a great deal just by wandering around the Moon’s surface and comparing the view through your telescope to a map or atlas, but for those looking for a more structured approach following an observing program can be a good way to learn more about the Moon’s features.

The Astronomical League’s Lunar Program has an observing checklist of 100 features including naked eye and binocular objects and can be completed with a 60mm refractor.

The Royal Astronomical Society of Canada’s Isabel Williamson Lunar Observing Program is even more in depth with additional challenges and an optional list of 1000 lunar features that will keep any observer busy for quite some time.