Today Mercury crossed between the Earth and the Sun. These Mercurial transits occur roughly 13-14 times a century – the last one was in 2006 and though we only have to wait until November 2019 to see the next one, the following transit won’t happen until 2032.

Between clouds and trees in my Eastern sky this morning I wasn’t sure I would be able to catch the beginning of the transit but it worked out. I set up my 80mm refractor with a Baader solar film filter for white light viewing. With this telescope an 8-24mm zoom eyepiece gives me 20-60x, which is just about right for solar viewing as the high end of the range still allows the entire disk to fit within the field of view and daytime seeing conditions don’t often allow very high powers.

I first noticed a sunspot group (designated AR2542) near the center. The earliest hint of the Mercury came a few minutes later when I saw a small, perfectly round, dimple appearing on the edge of the solar disk. Watching the shadow appear on the limb and slowly separate was awesome.

By holding a camera up to the eyepiece (a technique known as afocal photography) I was able to capture some surprisingly detailed images. 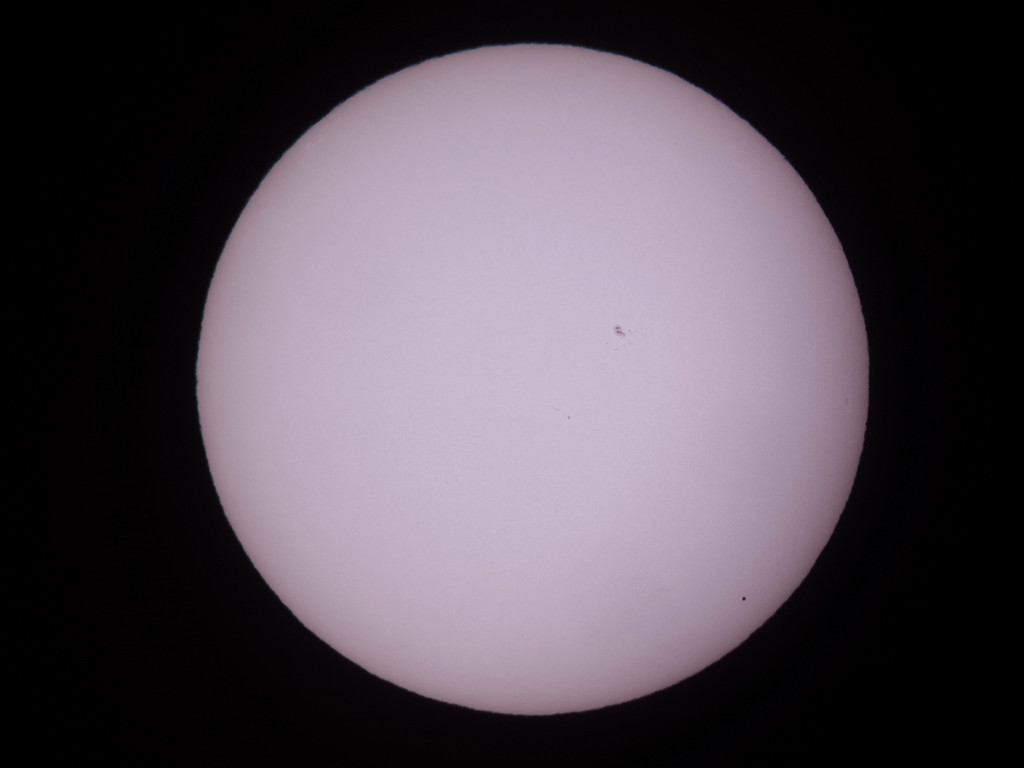 Afocal snapshot from 80mm f/6 refractor with solar filter @ 60x. Sunspot group AR2542 appears near the center and Mercury appears as a small, black dot in the lower right.

I brought my telescope to work and setup during lunch hoping to share the view with others. We were forced to wait for breaks in the clouds but around 10 people were able to get clear views of the Sun and Mercury over a span of ~30 minutes. The visible sunspots made for a nice comparison.

Original content copyright 2016 by David Philips. All Rights Reserved. This post may contain links to affiliate sites; sales through affiliate links may benefit this site.