Last night after dinner I looked out the window to see Jupiter high in the sky with the nearly full Moon not far away. There were no signs of clouds so I decided to check if anything interesting might be visible on the planet. For this I use an app called Jupiter Simulator that shows me GRS and moon transits on my Android tablet. There are similar apps available for iOS and an online javascript utility at Shallow Sky.

I was pleasantly surprised to learn that Ganymede was currently in the middle of a transit. Even better, the Great Red Spot was just appearing on the Eastern limb. I grabbed my smallest aperture telescope that takes interchangeable eyepieces, a 60mm refractor, and headed outside.

END_OF_DOCUMENT_TOKEN_TO_BE_REPLACED

This month offers prime viewing for one of the most interesting objects in our Solar System as Jupiter is now well positioned for observation from twilight to dawn.

Jupiter is easily visible to the naked eye as the brightest star-like object in the sky. Currently it is found in Cancer, which can be a difficult constellation to locate in my suburban sky – look for it between Gemini and Leo. 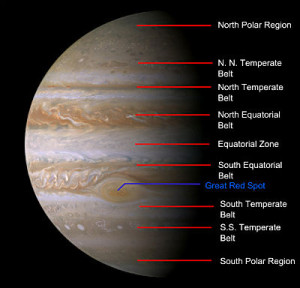 Annotated picture of Jupiter taken by the Cassini spacecraft on December 29, 2000 (Credit NASA/JPL for original picture).

The planet offers a host of features for users of small telescopes. At powers around 10x the four Galilean moons can be seen nicely aligned with the planet. Increase the magnification to 40x and the main equatorial belts stand out clearly. Going to 100x and higher reveals more belts and zones.

For many observers of Jupiter the Great Red Spot (GRS), an enormous storm that has raged for hundreds of years, is a sought after highlight. Magnifications of around 130x are a good starting point for your first views of the GRS.