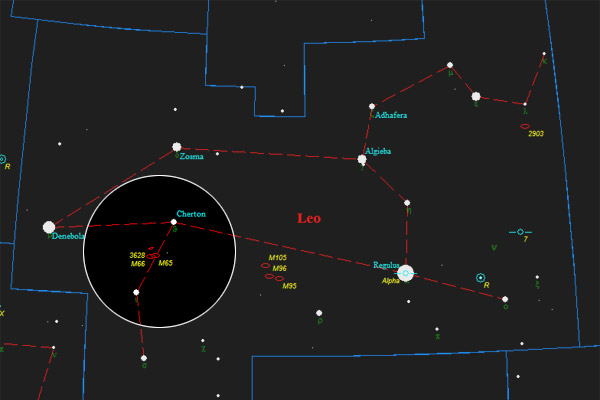 Before viewing a target in a new constellation I always need to spend some time getting my bearings – learning the constellation’s position and how it looks in my sky. The first time I viewed the Leo Triplet I found Leo by using my planisphere and The Big Dipper as a pointer, sighting through Delta and Gamma Ursae Majoris, I first recognized the Sickle and then traced out the rest of the constellation. Now that I am familiar with the constellation, Leo is easy to spot due to this distinctive Sickle that forms the Lion’s head.

The Eastern triangle that makes up the Lion’s haunches is the area we want to focus on. Denebola (Beta Leonis) is the brightest of these three stars followed by Zosma (Delta Leonis), and, much dimmer than the others, Chertan (Theta Leonis). Looking South from Chertan we find Iota Leonis, which in my suburban sky is usually difficult to see by eye, but can be picked out with some effort.

Going to the 10″ Dob I sighted about half-way between Theta and Iota Leonis with my red dot finder, then used the 8×50 RACI finder to match the star field with what was shown in the Pocket Sky Atlas. If you don’t have a star atlas check out the free Deep Sky Atlases from Deep-Sky Watch.

I started with a 30mm eyepiece in my 10″ f/5 Dob, for 42x, and quickly detected the bright cores and fuzzy surroundings of M65 and M66. Moving to 24mm and 52x darkened the background and made the brighter pair stand out. NGC 3628 was much harder to detect but I eventually made out its long, thin form by focusing on one of the two brighter stars which flank it to the North and South. All three galaxies looked a bit better in a 14mm eyepiece at about 89x.

Viewed in the 5″, M65 and M66 were much dimmer but still visible at 30mm (32x). Moving to 24mm (39x) and then 14mm (68x) improved the apparent contrast of these galaxies by darkening the sky background, but there was no immediate sign of NGC 3628. After a few minutes of concentrated observing, using the same technique of focusing on one of the bright stars to the North and South, I was able to detect the slightest brightening in the shape and location I had just seen in the 10″. Looking away and coming back several times confirmed that I had indeed seen the dimmest member of the Triplet.

So while the Leo Triplet can be observed in a 5″ telescope, in my skies the extra aperture of the 10″ made a significant difference in the views of all three galaxies. Still, I’m confident that M65 and M66 would be visible in even smaller instruments in most skies.