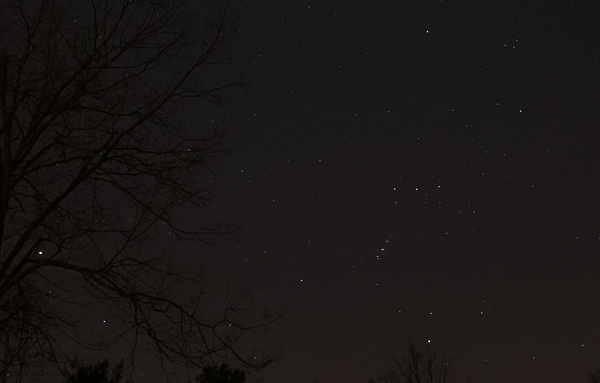 Orion – The Hunter in early Spring. With the exception of Castor, all of the double stars visited during this session can be found in this photo.

When you think of night sky object classes within the grasp of the common 60mm refractor double stars often end up near the top of the list. Like the Moon and planets, many of these multiple star systems are bright enough to cut through light pollution making them easy to view from wherever you happen to be. There are some spectacular double stars in and around Orion and Late Winter / Early Spring is a good time to view them.

To get an idea of which double star systems we might hope to split using a 60mm telescope we can use the Dawes limit. This calculation (4.56 / aperture in inches) puts the theoretical resolution limit for a 60mm scope at 1.93 arcseconds. A good resource for finding recent separation measurements of double stars is the Stelle Doppie front end to the Washington Double Star Catalog (WDS).

The seeing during tonight’s session was not very good, but one of the nice things about a 60mm scope is that it isn’t terribly affected by poor seeing. Some of the more difficult splits you might be able to pull off under better conditions may not be possible but the best of these multiple star systems will be visible in most any seeing.

The Trapezium, Theta1 Orionis, is the middle star in Orion’s sword and is perhaps the most famous multiple star system. The four brightest stars should be easily visible in a 60mm scope. Tonight I could see them as distinct points at 38x but the view is much better at 70-100x. I’ve yet to confirm observation of the E or F components in anything smaller than a 4″ refractor but I’ll certainly keep trying.

Alnitak (Zeta Orionis), is a triple star system. It is easily spotted as the left-most of Orion’s belt stars. The WDS currently lists the AB pair at 2.4″ separation and the BC pair at 53″. Tonight I was able to make out the faint C component with some difficulty at 113x. I have previously split the closer AB pair in the 5″ OneSky at 244x, which gives some idea of its difficulty.

South of Alnitak you’ll find the Sigma Orionis multiple star system. Viewing at 38x, I could easily see three stars. These are the AB, D, and E components of the system. The C star is much fainter but I could catch glimpses of it using averted vision at 148x and 211x when the seeing allowed.

Nearby Struve 761 is easily viewed in the same field as Sigma Orionis. Tonight I could see all three components at 148x, with the closer BC pair requiring averted vision to split.

Eta Orionis, at 1.8″ separation, is below the resolution limit of a 60mm telescope but is worth a look anyway. At 211x I may have seen some elongation during periods of steady seeing.

Rigel (Beta Orionis) can actually be easier in smaller scopes than larger ones. This is because the challenge is not in the distance between the components but in the difference in magnitude as the small, spark-like companion is often lost in the glare of the primary star. The 60mm shows the companion easily at 113x.

Branching out from Orion a bit, I visited a few nearby, notable doubles:

Sirius (Alpha Canis Majoris) is even more difficult than Rigel due to a greater difference in magnitude between the component stars. Dry skies and a telescope with excellent contrast can help control the glare that often veils the secondary. Bright Sirius is also known as the Dog Star and its tiny companion, the Pup. I saw no hint of the Pup tonight.

Beta Monocerotis is becoming one of my favorite stars to view. This famous triple star system is composed of three nearly identical, bright white stars. Tonight, at 71x, I could make out two of the stars with the second pair looking like a peanut. The best view was at 148x which puts all three stars quite close with the tighter pair of stars nearly touching. This is a truly beautiful sight.

I ended the night with an easy pair, Castor (Alpha Geminorum). At 4.6″ separation and similar magnitudes this was split cleanly at 38x. If you’re not at least seeing signs of elongation by 50x you may be looking at Pollux, its twin. Castor is the more Northerly of the two. The view at 113x is very nice indeed.