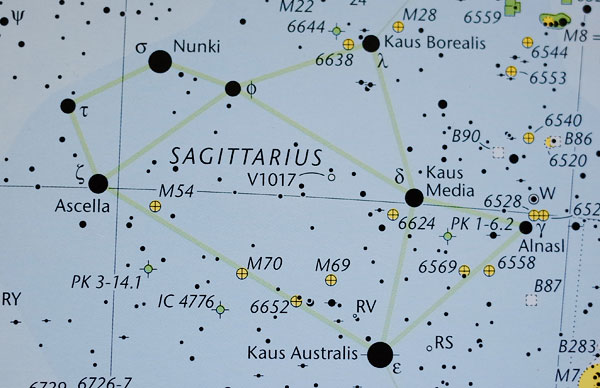 If the dim star from which Nova Sagitarii 2015 No. 2 originated was charted in the Pocket Sky Atlas, it would be hidden under the “U” in “Sagittarius”.

By the end of March I had pretty much written off seeing Nova Sagittarii 2015 No. 2.

In Sky & Telescope’s oft updated article on the nova, Alan MacRobert refers to those unwilling to get out in the cold, pre-dawn hours as “slug-a-bed”s. Yeah, that’s me. My interested peaked about the same time as the Nova’s brightness in late March, then faded as the next day it dropped below magnitiude 5 and appeared to be on its way out completely.

Then over the next few days something strange happened – the nova unexpectedly brightened and I made plans to get up early and observe it. My first attempt was Easter morning, unfortunately I planned to catch Sagittarius near its peak altitude and underestimated the brightness of the sky at 5:30 AM. The sky was too bright to adequately make out the constellation though I did get a nice view of Saturn in the 60mm refractor.

With the forecast showing several days of clouds and rain I wondered if I might have missed my chance. Would the Nova hold on? Interestingly enough it turns out to be following a pulsing pattern, as it bounces between magnitude 4 and 6.5. 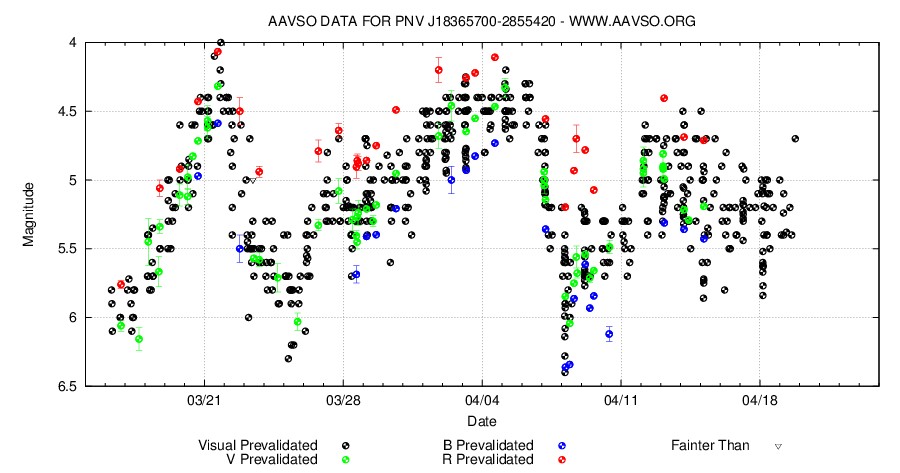 Nova Sagittarii’s magnitude has been oscillating between 4 and 6.5 as of 4/19. See its current magnitude curve at AAVSO

So more than three weeks after its brightness peaked I got my first look at the Nova in Sagittarius this Saturday morning. At 4:30 AM the skies were dark enough to make out the teapot of Sagittarius low in the Southern sky. I had caught the nova near the lower end of its brightness range and it was not visible by eye but was easily seen in 8×40 binoculars.

In the 60mm refractor at 41x it was easy to match the stars surrounding the nova to the pattern shown in the Pocket Sky Atlas and thus confirm the brighter star I was seeing was not charted and must be the nova. The star didn’t show much color but seemed a bit warmer than others.

While I was in the neighborhood I took a quick peek at M22, which was easily visible in the 8×40 binoculars as well as the 60mm refractor, but I could not resolve any stars at 41x. M8 showed a bit of nebulosity in the 60mm scope.

I ended the short session by viewing Saturn. At 121x the Cassini division could be seen at the ring’s maxima during brief periods of steady air. The planet showed a bit of peach color compared to the rings and some hints of banding were visible as well.

I’ll be watching the nova’s light curve to see if the pattern continues and try to catch another look when it is brighter than magnitude 5.