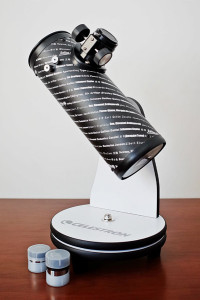 The FirstScope’s design has some good things going for it. The simple alt-az mount is inexpensive to make yet sturdy, overcoming one of the most common problems with cheap telescopes – the flimsy mount. The short, 300mm, focal length makes it capable of relatively wide fields, which is very helpful for learning your way around the night sky, while the 76mm aperture is enough to view many of the brighter Messier objects in addition to the Moon, planets, and double stars.

There are optical concessions. The mirror is spherical rather than parabolic, the adverse effects of which are exacerbated by the short focal length of the scope. The take away is that you shouldn’t expect the FirstScope to be a great performer at higher powers on the Moon or planets.

Most reflector telescopes allow the primary and secondary mirrors to be aligned – a process called collimation. The FirstScope’s primary is fixed to the back of the OTA and while the secondary can be adjusted, in practice the spherical mirror and lack of center spot make it difficult.

Despite its compromises I thought the FirstScope could have potential as an inexpensive wide field scope and when I saw the price drop once again under $35, I couldn’t resist the call. 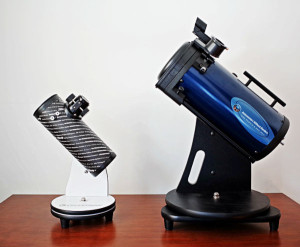 The scope is shipped fully assembled. All that needs to be done is to pull it out of the carton, remove the dust caps from the end of the tube and focuser, and insert an eyepiece. The FirstScope is truly small, measuring about 13.5″ high and weighing under 4lbs. The Optical Tube Assembly (OTA) itself is about 10.5″ long.

The OTA and base feel surprisingly well made for the price. The mount seems solid and has adjustable tension for smooth movements, though adjusting the azimuth motion requires a couple of wrenches. The included eyepieces, a 20mm Huygens (15x) and 4mm Symmetrical Ramsden (75x), are simple two-element designs. No finder is included but the OTA has mounting studs for one.

A minimal single-page instruction sheet is included with the scope. You can download a more comprehensive manual from Celestron’s website.

Like all reflectors the FirstScope gives an image that is rotated 180º when viewing from behind the scope. While not an issue for astronomy (after all, there is no right-side up in space) it does make the scope less suited for daytime use than other designs.

The table-top mount requires a sturdy surface for observing. My first time out I tried putting the telescope on the hood of the car as, being February in Massachusetts, the backyard picnic table was buried under a snow pile. I quickly realized this made it difficult to get the scope aimed where I wanted. Admitting defeat, I went back inside to fetch a kitchen stool for the scope and a compact camping chair for me. This turned out to put the scope in a very good position and I was now ready to observe. In my coat pockets I had the included 20mm and 4mm eyepieces as well as 25mm, 20mm, and 10mm Plossls.

Even when positioned well aiming the scope can be tricky without a pointer of some kind. I’d recommend adding a red dot unit (Celestron StarPointers may be found on eBay for $10 shipped) or attaching your own sighting device to the provided finder studs. For this session I had no pointer but got the hang of aiming the scope after a little while, especially once I started using a 25mm Plossl for a finder eyepiece (more on the eyepieces in a bit).

With the 1st Quarter Moon lightening the sky I started looking for Comet Lovejoy which is now below 5th magnitude. After spotting the comet in a pair of 8×40 binoculars, I was able to find the comet in the FirstScope using the included 20mm Huygens eyepiece. The view here wasn’t very different than in the binoculars; not much more than a fuzzy looking star. I put in the 4mm Symmetric Ramsden not expecting to see much but after adjusting focus was treated to a great view of the pseudo-nucleus and coma.

Next I put the 20mm Huygens back in the focuser and pointed the scope at the Pleiades. The view was a bit disappointing. The 20mm Huygens barely fit the entire cluster within the field of view and the outer 50% of stars were blurry. Hopeful that the eyepiece was to blame I switched to a 20mm Plossl. Now there was the Pleiades cluster that I know and love! The entire cluster was now easily visible with room to spare and the view was sharp across the field. What a difference an eyepiece can make.

On to the Double Cluster in Perseus; with the 20mm Plossl both clusters as well as the nearby asterism Stock 2 were visable in the same field. Switching to the 10mm Plossl gave a very nice view of NGC 869 and NGC 884 at 30x.

I visited several more subjects and the method of starting with the 25mm Plossl as a finder eyepiece, then switching to the 4mm SR or ocassionally the 10mm Plossl worked well. Once I got into a groove, observing with the FirstScope was a lot of fun and I spent about an hour with it in sub-freezing temperatures wanting to see what it would show me next.

I had hoped for better results from the included 20mm Huygens. In addition to a very narrow field of view, the outer 50% of the field is blurry. Replacing this with a 20mm Plossl transforms the scope but a 25mm Plossl, which gives a 4.3º true field of view at 12x, is even better.

The big surprise was just how decent the included 4mm SR turned out to be. The views at 75x were well above my expectations for this cheap little telescope. This is not meant to be a planetary scope but Jupiter’s two main bands were visible and on the Moon the eyepiece showed craters in surprising detail though it did add some CA along the rim. On M42 the 4mm showed four stars in the Trapezium.

If you already have or can get a 20-25mm Plossl the FirstScope will give better views than a pair of 10×50 binoculars. If you have to choose between a 25mm Plossl and a red dot finder, get the 25mm as the wider field of view really helps in locating objects. A 10mm Plossl is a good choice for a second eyepiece upgrade. Plossls in this focal length range can be found for under $25.

I wouldn’t recommend investing in a better high power eyepiece just for the FirstScope. The scope is best suited for use at lower powers and the 4mm SR is fine for occasional views at 75x.

If you are considering the Celestron FirstScope as a beginner scope it’s hard to argue that you couldn’t do better by putting the money you would spend on upgrading the eyepieces into a better telescope. But if you already have some decent eyepieces from other telescopes, then the FirstScope is easily worth the price.

Other Telescopes to Consider

While there are certainly much better telescopes available, I’m not sure there’s another telescope that combines the size, simplicity of use, and price of the FirstScope. I’ll break the alternatives down by price range:

The FirstScope stands alone here. If you can find one for under $40 and add a 25mm Plossl for $20 and red dot finder for around $10 then you’re off to a good start for very little money.

Orion FunScope, 76mm, f/3.9 (See price at Amazon) – This is same tube assembly as the FirstScope with some different accessories. It generally runs closer to $70 but includes the red dot finder, somewhat better eyepieces, and a more complete instruction manual. The FunScope manual can be downloaded from the Orion site and compared to the FirstScope manual. The base of the mount has a tripod adapter that lets you attach the whole thing to the top of a photo tripod so you don’t need a table to observe. Note this requires a sturdy tripod along the lines of a Manfrotto 190.

Celestron Travel Scope 70, 70mm, f/5.7 (B&H, Amazon) – This 70mm refractor can usually be found for around $65. It includes a backpack, 45º prism diagonal, tripod, and a couple of eyepieces (20mm and 10mm). The straight through optical finder is low quality and would be best replaced with a red dot unit. The prism diagonal will give correctly oriented images for daytime use but a 90º mirror diagonal is recommended for improved astronomy performance. The tripod is marginal; usable fully retracted but shaky when extended. Overall this scope could be more capable but is let down in several areas out of the box. If you don’t mind spending extra on replacing some of the accessories (or already have replacements for use with other telescopes) it could be a worthwhile choice, especially if daytime use is of much interest.

Orion SkyScanner 100mm, 100mm, f/4 (Amazon) – This is a similarly designed, larger version of the FirstScope/FunScope . The 100mm aperture will provide 1.7x the light captured by the smaller 76mm reflectors but the big improvement is the parabolic mirror, which provides sharper focus and better corrected images allowing higher magnifications to be used.

Astronomers Without Borders OneSky, 130mm, f/5 – Yes, the OneSky costs more than 4x the price of the FirstScope but that $200 buys you a capable but compact, well rounded telescope. One that collects 3x the amount of light and can frame the Pleiades as well show Jupiter’s Great Red Spot or the Cassini Division in Saturn’s rings. See my review of the AWB OneSky for more.

One thought on “Celestron FirstScope Review”